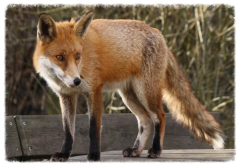 The red fox is native to the British Isles, and widespread throughout mainland Britain.Foxes moved into urban areas after the First World War due to a change in people’s lifestyles. The new transport systems allowed people to work in one place and to live in another, leading to the building of suburban housing in once rural areas.

Rural foxes quickly urbanised, taking advantage of the food and shelter provided in the relatively large gardens, from compost heaps, bird-tables and garden buildings. Foxes are now accustomed to living near to people and successive generations have spread inwards towards the city centre. There are now more opportunities of food and shelter for foxes in towns and cities than in the surrounding countryside. Although foxes are predominantly nocturnal, it is not unusual to see urban foxes out during the day.

Foxes are controlled using live catch traps that are baited and set in areas of known fox activity.

It is a requirement of the Wildlife and Countryside Act 1981 to check all live catch traps at least once every 24 hours. However, it is strongly recommended to check them once every 12 hours. All trapped animals must be treated humanely.

Causing unnecessary suffering, whether deliberately or through neglect is an offence. The provisions of The Protection of Animals Act 1911 and the Wild Mammals Protection Act 1996 should be considered.

Foxes are becoming more and more common in urban society and can cause problems in people’s gardens and threaten the lives of pets. Foxes are known carriers of sarcoptic mange (scabies), which can be transferred to humans. They also carry distemper virus which can be fatal for dogs and other beloved pets hence the need for Fox control London.